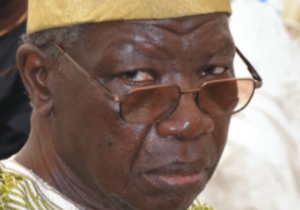 Alhaji Lateef Kayode Jakande, (born 23 July 1929) was a journalist who became governor of Lagos State in Nigeria from 1979 to 1983, and later was Minister of Works under the Sani Abacha military regime (1993–98). Raufu Olaiya Bakare was part of his active councilors represents Itire Ikate area now called Itire Ikate Local Government

Lateef Kayode Jakande was born in the Epetedo area of Lagos State 29 July 1929 Both parents are from Omu-Aran, Kwara State. He studied at the Lagos public school at Enu-Owa, Lagos Island, then at Bunham Memorial Methodist School, Port Harcourt (1934–43). He studied briefly at King’s College, Lagos in 1943, and then enrolled at Ilesha Grammar School in 1945, where he edited a literary paper called The Quarterly Mirror.

In 1949 Jakande began a career in journalism first with the Daily Service and then in 1953 joining the Nigerian Tribune. In 1956 he was appointed editor-in-chief of the Tribune by the owner Chief Obafemi Awolowo. His editorials were factual and forthright, and were treated by the colonial powers with respect. After leaving the Tribune in 1975, Jakande established John West Publications and began to publish The Lagos News. He served as the first President of the Newspaper Proprietors Association of Nigeria (NPAN).
Governor of Lagos State

Encouraged by Awolowo, he ran for election as executive governor of Lagos State in 1979, on the Unity Party of Nigeria platform. He defeated his opponents, Adeniran Ogunsanya of NPP and Sultan Ladega Adeniji Adele of National Party of Nigeria and was subsequently sworn in as governor. His administration was effective and open and implemented the cardinal policies of his party. He introduced housing and educational programs targeting the poor, building new neighbourhood primary and secondary schools and providing free primary and secondary education. He established the Lagos State University. Jakande’s government constructed over 30,000 housing units. The schools and housing units were built cheaply, but were of great value. Some of the housing units include low cost estates in Amuwo-Odofin, Ijaiye, Dolphin, Oke-Afa, Ije, Abesan, Iponri, Ipaja, Abule Nla, Epe, Anikantamo, Surulere, Iba, Ikorodu, Badagry. To fund some of the projects, Jakande increased the tenement rates and price of plots of land in affluent areas of Victoria Island and Lekki Peninsula and the processing fees for lottery, pools and gaming licenses. He also completed the construction of the General Hospital in Gbagada and Ikorodu and built about 20 health centres within the state. As a governor, he established 23 local government councils which were later disbanded by the military. He also started a metroline project to facilitate mass transit. The project was halted and his tenure as Governor ended when the military seized power on 31 December 1983.

After the military take-over in 1983, Jakande was charged, prosecuted and convicted of treason, although later he was pardoned. After being freed, he accepted the position of Minister of Works under the Sani Abacha military regime, which earned him some criticism. He claimed that he had accepted the post under pressure from M. K. O. Abiola and other progressive leaders. In a later interview, he said he had no regrets about the decision to serve. However, his association with Abacha handicapped his career in politics after the restoration of democracy in 1999.

Alhaji Lateef Kayode Jakande became a senior member of All Nigeria Peoples Party (ANPP) when the UNPP and APP merged. In June 2002, he was “suspended” by a faction of the ANPP loyal to Chief Lanre Razaq. Jakande was the first chairman of the Action Party of Nigeria (APN) when it was formed in November 2006. In May 2009, he was reported to be engaged a struggle for control of the party with his former ally, Dr. Adegbola Dominic.