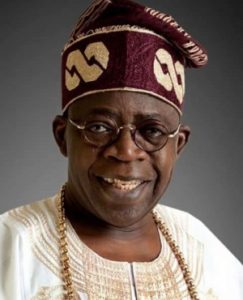 Bola Ahmed Adekunle Tinubu (born 29 March 1952) is a Nigerian politician who was elected senator for the Lagos West constituency in Lagos State, Nigeria in 1993. The election was just prior to a military take-over in December 1993. After the return to democracy, he was elected governor of Lagos State, holding office from 29 May 1999 to 29 May 2007. He is an influential member of the All Progressives Congress party; he also holds both the chieftaincies of the Asiwaju of Lagos and the Jagaban of the Borgu Kingdom in Niger State, Nigeria. He has been routinely referred to as the national leader of the APC during the presidency of Muhammadu Buhari.

Bola Ahmed Adekunle Tinubu,(Jagaban of Borgu) was born on 29 March 1952 in the city of Lagos, Nigeria. He attended St. John’s Primary School, Aroloya, Lagos and Children’s Home School in Ibadan, South West of Nigeria. Tinubu then went to the United States in 1975, where he studied first at Richard J. Daley College in Chicago, Illinois, and then at Chicago State University. He graduated in 1979 with a Bachelor of Science degree in Accounting.

His political career began in 1992, on the platform of the Social Democratic Party (where he was a member of the faction of the Peoples Front led by Shehu Musa Yar’Adua and made up of other politicians such as Dapo Sarumi, Abdullahi Aliyu Sumaila, Rabiu Kwankwaso and Yomi Edu). He was elected to the Nigerian Senate, representing the Lagos West constituency in the short-lived Nigerian Third Republic. After the results of the 12 June 1993 presidential elections were annulled, Tinubu became a founding member of the pro-democracy National Democratic Coalition, a group which mobilized support for the restoration of democracy and recognition of the results of the 12th of June. He went into exile in 1994 and returned to the country in 1998 after the death of the military dictator Sani Abacha, which ushered in a transition to civilian rule.

In the run-up to the 1999 elections, Bola Tinubu was a protégé of Alliance for Democracy (AD) leaders Abraham Adesanya and Ayo Adebanjo. He won the AD primaries for the Lagos State gubernatorial elections in competition with Funsho Williams and Wahab Dosunmu, a former Minister of Works and Housing. In January 1999, he stood for the position of Executive Governor of Lagos State on the AD ticket and was elected.

As Governor Of Lagos State

When he assumed office in May 1999, Bola Ahmed Tinubu promised 10,000 housing units for the poor. During the eight-year period of his being in office, he made large investments in education in the state. He also initiated new road construction, required to meet the needs of the fast-growing population of the state.

Tinubu, alongside a new deputy governor, Femi Pedro, won re-election to office as governor in April 2003. All other states in the South West fell to the People’s Democratic Party in those elections.

He was involved in a struggle with the Federal government over whether Lagos State had the right to create new Local Council Development Areas (LCDAs) to meet the needs of its large population. The controversy led to the Federal government seizing funds meant for local councils in the state. During the latter part of his term in office, he was engaged in continuous clashes with PDP powers such as Adeseye Ogunlewe, a former Lagos State senator who had became minister of works, and Bode George, the southwest chairman of the PDP.

Relations between Bola Tinubu and deputy governor Femi Pedro became increasingly tense after Pedro declared his intention to run for the gubernatorial elections. Pedro competed to become the AC candidate for governor in the 2007 elections, but withdrew his name on the eve of the party nomination. He defected to the Labour Party while still keeping his position as deputy governor. Tinubu’s tenure as Lagos State Governor ended on 29 May 2007, when Babatunde Fashola of the Action Congress took office. Fashola had been chief of staff to Bola Tinubu.

In April 2007, after the elections but before the new governor had taken over, the Federal Government brought Asiwaju Bola Tinubu before the Code of Conduct Tribunal for trial over the alleged illegal operation of 16 separate foreign accounts. In January 2009, the Economic and Financial Crimes Commission cleared Bola Tinubu and governors James Ibori of Delta State and Obong Victor Attah of Akwa Ibom State of charges of conspiracy, money laundering, abuse of office and official corruption in relation to a sale of V-mobile network shares in 2004. In September 2009, however, there were reports that the British Metropolitan Police were investigating a transaction in which the Lagos State government made an investment in Econet (now Airtel). Bola Tinubu said the transaction was straightforward and profitable to the state, with no intermediaries involved. The Federal Government rejected a request by Britain to release evidence needed for further investigation and prosecution of the three Nigerian ex-governors in a London court.

In March 2009, there were reports that a plot had been identified to kill Chief Bola Tinubu. The Alliance for Democracy called on the Inspector General of Police, Mike Okiro, to conduct a thorough investigation.

Following the victory of the People’s Democratic Party in the April 2007 elections, Bola Tinubu was active in negotiations to bring together the fragmented opposition parties into a “mega-party” capable of challenging the PDP in 2011. In July 2009, he called for implementation of electoral reforms spelled out in the Uwais report to ensure that the 2011 elections would be as free and fair as the elections of 1993 had been. In December 2009, there were reports that Babatunde Fashola and Bola Tinubu had fallen out over the issue of whether Fashola should run for reelection in 2011, with Tinubu said to be supporting the commissioner for environment, Muiz Banire. Tinubu later bowed to pressure and supported Fashola’s candidature which had been adjudged by the public as good. Another scuffle on the successor of Fashola put Tinubu against him in 2015. Fashola later relented and threw his full weight behind Akinwunmi Ambode, the then gubernatorial candidate of the APC, who later succeeded him.