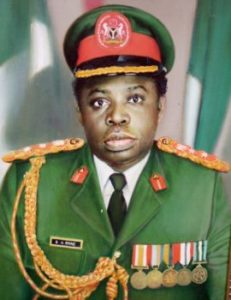 Brigadier General Raji Alagbe Rasaki (born 7 January 1947) is a retired Nigerian military officer who was military governor in turn of Ogun State, Ondo State and Lagos State between 1986 and 1991 during the military administration of General Ibrahim Babangida.[

Raji Rasaki was a one time military governor of Ogun State (1986–87) before his re-deployment to the nation’s economic nerve center, Lagos State, becoming that state’s military governor in 1988. Soon after, he embarked on a massive demolition exercise of illegal structures to rid the State of shanties. That singular act resulted in the re-vitalization of Lagos, and a boom in the real estate market.[citation needed]. It also earned him the nickname of “acsion governor” (action governor), a mockery of the way in which he referred to himself.

A member of the armed forces ruling council; he gained national prominence during the 22 April 1990 unsuccessful coup against the Ibrahim Babangida regime. The plotters led by the late Major Gideon Orkar had attempted to overrun the then seat of the Federal Government; Dodan Barracks, and in that process killing Babangida’s Aide de Camp, Major U.K. Bello. Late Major Orkar had announced many far-reaching declarations, which included radical restructuring of the federation bordering on the excision of five core northern States until the coup was foiled by officers loyal to Babangida. The first announcement to this effect came from the then military governor of Lagos state, Col. Raji Rasaki, who declared in a radio broadcast that the rebellion was already being contained.

Following his retirement from the army, Rasaki wrote several policy papers and memoirs. In addition he pursued a career as a statesman; participating in numerous conferences and forums. As a public speaker, he addressed audiences across the country and abroad. In 2005 he joined the Nigerian Peoples Democratic Party (PDP).

In 2016, he celebrated 40 years of his marriage to Senator Fatimat Olufunke Raji-Rasaki.