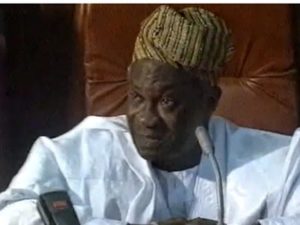 Otedola was born on the 16 July 1926 into a Muslim family at Odoragunsin, Epe Local Government Area of Lagos State. He died on 5 May 2014 at his residence in his home town of Epe, Lagos.
Early life

After moving to Lagos to pursue his education he won a scholarship to study Journalism at the Regent Street Polytechnic in London where he graduated in 1958.

He began his career as a teacher before working as a reporter at the St. Pancras Chronicle, then as a reporter and later sub-editor at The Guardian and The Times in England.

On his return to Nigeria in 1959 he became an Information Officer in the Western Nigeria government, and while in this post he was appointed the Editor of the Western Nigeria Illustrated. In 1961 he moved into public relations, working for Western Nigeria Television/Western Broadcasting Service (1961-1964) and Mobil Oil Group of Companies (1964-1977), continuing as a consultant to Mobil after leaving the company.

He was elected governor of Lagos State from 1992 to 1993 on the platform of the National Republican Convention (NRC), leaving office when General Sani Abacha came to power. His administration facilitated establishing the Yaba College of Technology campus in Epe, his home town.

After leaving office, he continued his career as a writer, a consultant holding positions on the boards of various businesses, and a philanthropist. In February 2010 ThisDay newspaper announced that he was among 15 eminent Nigerians who had won Lifetime Achievement Awards. His son Femi Otedola became the billionaire owner of Nigerian oil giant Zenon Petroleum and Gas Limited. The Michael Otedola College of Primary Education was named after him after his demise.