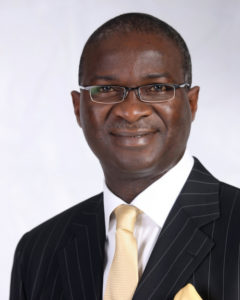 Babatunde Raji Fashola of Yoruba origin, from Lagos, was born in Lagos on 28 June 1963. He attended Birch Freeman High school Lagos and Igbobi College Lagos. He studied Law at the University of Benin from where he graduated with a Bachelor of Laws, LL.B.(Hon), degree in 1987.

He is married to Mrs. Abimbola Emmanuela Fashola and they have two children.
Legal career

He was called to the Nigerian Bar as a solicitor and advocate of the Supreme Court of Nigeria in November 1988 after completing the professional training programme at the Nigerian Law School, Lagos which he undertook between 1987 and 1988. His legal career of over one and a half decades, commenced in the law Firm of Sofunde, Osakwe, Ogundipe and Belgore, where he cut his legal teeth as a litigator over such wide-ranging areas of specialisation as, intellectual property (registration of trade marks), commercial law, covering general contracts, company activities, mergers, acquisitions, right issues, ownership of shares and equity of corporations, as well as land disputes, criminal law and chieftaincy matters, in all of which he has come to acquire appreciable expertise and vast experience.

Fashola, a Notary Public of the Supreme Court of Nigeria, has been variously honoured with awards and certificates of merit including the Distinguished Alumnus Award conferred on him by the University of Benin Alumni Association in recognition of contributions to the Alumnus association and humanity. He is also a recipient of Lagos State public service club Platinum Award for outstanding contribution towards development. As well as Alliance for Democracy ” Igbogbo Bayeku Local Government Award” in recognition of activities towards the success of the party.

Babatunde Fashola is also a Patron of the Law Students Association of the University of Benin and he is the second law graduate from the University of Benin and the first member of the Nigerian Law School graduating class of 1988 to be conferred with the professional rank of Senior Advocate of Nigeria. He is also the First ever Chief of Staff to be so honoured. He is a member of the Nigerian Bar Association, the International Bar Association and an Associate of the Chartered Institute of Taxation of Nigeria.

He was Chief of Staff to his predecessor, Asiwaju Bola Ahmed Tinubu. Fashola had during his tenure as Chief of Staff also dubbed as the Honourable Commissioner to the Governor’s office. He was the first person to hold both offices simultaneously.

Babatunde Raji Fashola commenced a four-year tenure as the Executive Governor of Lagos State in Nigeria on 29 May 2007. In June 2007, Babatunde Fashola appointed former Inspector General of Police Musiliu Smith head of the Lagos State Security council, a body charged with taking a holistic look at the anatomy of crime in the state. The Babatunde Fashola Good Governance Group (G3) movement is a good example of Fashola’s commitment to reaching out to the people using various media channels.

Taxation
One of the main source of Lagos State government’ funds are received as tax payers’ money. Recently, a controversial proposal to charge consumption tax on eateries had been enforced. The matter was taken to court, but the ruling was announced in the government’s favour.

Babatunde Fashola vowed to rehabilitate the state’s public schools, long being neglected with time. Among the schools being habilitated included the governor’s alma mater, Birch Freeman High School, which is located at a busy metropolis of Surulere.

The biggest task Babatunde Raji Fashola faced in office as Governor of Lagos State is his visionary project to transform Lagos into a mega city, the first of its kind in Lagosian history. Although initialised under the former governor, Bola Ahmed Tinubu, in June 2002, the mega project task accelerated under Fashola’s governorship. Both private and public sectors are involved in fulfilling the project.
Newly added toll gates and roads at the Lekki-?p? Expressway.

The crucial part of the mega city project is the rehabilitation of Lagos’ infrastructures and districts. Formerly taken care of by the federal government, they were immediately neglected, as Abuja was declared Nigeria’s new capital since 1991. According to Lagos Rail Mass Transit, proposed light railways will be consisted of the outskirt blue-line and inner red-line destinations. As part of the project, the Badagry Expressway, which links Lagos directly to the south-eastern border of Benin Republic, is currently being rehabilitated by various contractors, with BRT and railway networks being established.

Another ambition is to recover lands at Victoria Island, being lost to erosion for decades. This artificial terrain is the location of the proposed Eko Atlantic City. This is also to support housing project that would accommodate up to 25 million Lagosians by 2015, a population growth from 15 million that could turn Lagos into the world’s third largest city.

In October 2009, Babatunde Fashola posthumously dedicated a garden personally, in honour of the memory of late professor Ayodele Awojobi at Onike Roundabout, Yaba, Lagos, with a statue of the famous academic erected at the centre. Artists of repute such as Oladejo Victor Akinlonu has commended the Governor on a job well done on the various value enhancement and beautification of Lagos state being a pioneer in the beautification of the state since the 80’s Oladejo enjoined artists to work with the Governor Oladejo’s works such as the eyo masquerade and the Bust of Sir Alexander Molade Okoya Thomas where commissioned by the Governor.

As soon as Haiti was struck by a magnitude 7.0 Mw earthquake, Babatunde Fashola launched an appeal to raise up to one million US dollars. The funds raised were used to assist the victims of the Haiti quake. As this was in place, the Speaker of the Lagos State House of Assembly, Mr. Adeyemi Ikuforiji, said Nigerians should be prepared in events of natural disasters.

In May 2014, Fashola announced the compulsory use of life jackets on Lagos waterways.[19] In a 2012 accident, ten children from Ijora Awori, Lagos State, drowned while they were being ferried to school, because they were not wearing life jackets.