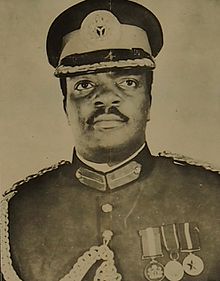 Mobolaji Olufunso Johnson (born February 9, 1936) is a retired Nigerian Army Brigadier and former military Governor of Lagos State from May 1967 to July 1975 during the military regime of General Yakubu Gowon. As Governor of Lagos, his administration supervised the unpopular demolition of Ajele Cemetery in the early 1970s.

Johnson was born to the family of Joshua Motola Johnson and his wife, Gbemisola Johnson (née Dudley-Coker), his father was of Egba, heritage and was a member of the Royal West African Frontier Force during World War II. His grandfather’s last name was previously Osholero but he changed it to Johnson after the priest who converted him to Christianity. The Johnson family moved to Lagos during the early parts of the twentieth century. Johnson had five other siblings including his brother, Femi Johnson, founder of Femi Johnson and Company of Ibadan.
Mobolaji Johnson started his education at Reagean Memorial Baptist School, Yaba, Methodist School in 1941. He then attended Hussey College, Warri, 1954. In 1955, he moved to Methodist Boys High School Lagos, the School his father attended, where he finished his secondary education in 1957. While in MBHS, Lagos, Mobolaji was a good all-round sports man. In 1959 Mobolaji attended the Officer Cadet Training School in Ghana. Mobolaji Johnson also attended the Mons Officer Cadet School in Aldershot and the Royal Military Academy, Sandhurst, United Kingdom, between 1960-1961.

Johnson was first appointed by Aguiyi-Ironsi as the administrator the former federal territory of Lagos in 1966. Ironsi was the head of state and wanted someone from Lagos to handle some of the problems of the federal territory.[4] In May 1967, Lagos State was created and Johnson became the first governor of Lagos; the state was now composed of the old Federal Territory of Victoria Island, Ikoyi and Lagos Island plus the additions of Epe, Badagry, Ikorodu and Ikeja divisions. He was involved in developing the civil service in Lagos State. Johnson was initially assisted in running the state with help from some key civil servants such as Administrative Secretary, Adeyemi-Bero, Finance Secretary, Folarin Coker, and the acting secretary to the Military Government, Howson Wright and waited until April 1968 before appointing his commissioners.
Building Lagos

Another coup ushered in a new military government in 1975. A new administration came in, under an anti-corruption banner.

Mobolaji Johnson’s administration was responsible for the demolition and disinterment of people buried at Ajele Cemetery such as Samuel Ajayi Crowther, James Pinson Labulo Davies, Madam Tinubu, Thomas Babington Macaulay, and many others.[6] The demolition met with a lot of criticism: Prof J.D.Y. Peele noted that the demolition had deprived “Lagosians not only of a precious green space in the heart of the city but of the memorials of their forebears”. Nobel Laureate Wole Soyinka called the demolition “the violation of that ancestral place” noting that “the order came from the military governor [Mobolaji Johnson]: ‘Dig up those dead and forgotten ancestors and plant a modern council building – with all its lucrative corollaries on that somnolent spot”.

In 1975 at the inception of the then Gen Murtala Mohammed administration Mobolaji Johnson was one of the two state Governors (along with the then Brig Oluwole Rotimi) found not guilty of corruption by the three-man panel commissioned to investigate the various allegations of corruption amongst the State Governors.

General Mobolaji Johnson retired from the Nigerian Army in 1975 and went into private business. He has four children, three sons and a daughter.

Mobolaji Johnson is currently the Chairman of Nigerian Conservation Foundation

He became a Director of construction giant Julius Berger Nigeria in 1979 and its chairman in 1996, a post he held until 2009.

Mobolaji Johnson is the Chairman of the Board of Trustees of Methodist Boys’ High School, Lagos Old Boys’ National Association. He was honoured with the position because he was a distinguished Old Boy who was of great assistance to his Alma Mater.

A road, an avenue, and a sports complex in Mobalaji’s home state bear his name as well as a Housing Scheme at Lekki both in Lagos.