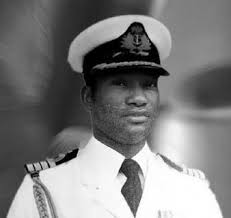 Okhai Michael Akhigbe (September 29, 1946 – October 13, 2013) was a vice admiral in the Nigerian Navy who served as de facto Vice President of Nigeria (as Chief of General Staff) during the General Abdusalami Abubakar led military government from 1998 till the termination of military government in Nigeria, in 1999. He served as Military Governor of Nigeria’s Ondo State from 1985 to 1986, and Military Governor of Lagos State from 1986 to 1988, after which he was appointed Chief of Naval Staff, the highest-ranking officer of the Nigerian Navy, and subsequently the Chief of General Staff, the highest-ranking military officer of the Federal Republic of Nigeria Armed forces. He died in the US on 28 October 2013.

He was the Principal Welfare Officer of the Nigerian Navy Flagship NNS Aradu, Military Governor of Lagos and Ondo States, Director, Naval Plans, Naval Headquarters, Flag Officer commanding the Easter Naval Command and Chief of Naval Staff.In 1998 he became the Chief of General Staff and Vice President of Nigeria. He was awarded the honour of the Grand Commander of the Order of the Niger (GCON), in 1998 and an honorary doctorate by the University of Benin in 2003. His military decorations include Force Service Star, Meritorious Service Star, and Defense Service Star.

Before his death, he was an Attorney with specialization in Maritime Law. He was also a seasoned businessman with substantial investments in real estate. Admiral Okhai Michael Akhigbe is remembered for his numerous services to the nation, especially his role during the transition from military to civilian rule in 1999 when he was the Chief of General Staff to Gen. Abdusalami Abubakar.

He was the single most important factor in the rehabilitation of the Teacher’s college Ekiti, later called Ondo State College of Education. Admiral Akhigbe, then a Commodore and military Governor of old Ondo State approved the appointment of USAID-HARVARD trained educationist, Dr Sam Adebayo Adewuya as the Sole Administrator of the college with the sole command of returning the dilapidated college to functional level within three years. The college has since evolved into the University of Education, Ekiti State TUNEDIK