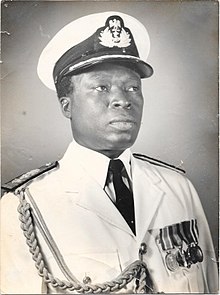 He was appointed Military Governor of Lagos State in July 1975-1977 after the coup that brought General Murtala Mohammed to power. He held the position of Lagos State Military Governor until 1977 when he was transferred to become governor of Imo State in 1977. He held this position until July 1978, after which he resumed his career in the Nigerian Navy.

Admiral Adekunle Shamusideen Lawal started his early education at Holy Cross Cathedral School, Lagos, Nigeria (1942-1945). St Peters Faji School, Lagos Nigeria (1945 – 1949). His secondary education was completed at the Methodist Boys’ High School in Lagos (1950-1955), he studied at College of Technology, Yaba, Lagos, after which he went on to receive his Advanced Level Certificate of Education (A’Levels) in three subjects (1958). He worked with the Ministry of Works and Survey in Kano, Nigeria as Assistant Technical Officer (1959). He attended the Ahmadu Bello University, Zaria, Nigeria (1960-1963), from where he graduated in 1963 with B.Sc.(Eng) Honors. He has a CMarEng and FIMarEng (Chartered member and a Fellow member of the Institute of Marine Engineering) and CNSE and FNSE (Chartered and a Fellow member of the Nigerian Society of Engineers). His additions professional qualifications include FSS and PSC.

Admiral Adekunle Shamusideen Lawal joined the Royal Nigerian Navy in September 1963 as a Sub-Lieutenant. In 1964 he was promoted to Lieutenant. In March 1964 he attended a Marine Engineering course with the Royal Naval Ships in Rotterdam, Holland. In 1966 he was promoted to Lieutenant Commander. From 1969 to 1971, Admiral Adekunle Shamusideen Lawal attended the Defence Naval Staff College in Wellington, India, where he received his M.Sc.(Eng). He was Chief of Material in the Nigerian Navy from 1973 to 1978 and was a member of the Supreme Military Council S.M.C. from 1972 to 1975 during the General Yakubu Gowon administration. Admiral Adekunle Shamusideen Lawal was also appointed to the Board of the Nigerian Port Authority as a full Board Member from 1972 to 1975. Admiral Adekunle Lawal also served as the Chief Engineer on numerous naval vessels including the NNS OGOJA, NNS BEECROFT and the NNS Nigeria during his time with the Nigerian Navy.

Admiral Adekunle Shamusideen Lawal was appointed military governor of Lagos State in 1975. As the governor of the most heavily populated state in Nigeria, one of the major challenges faced by his administration was managing the chaotic traffic problem in the state. During the World Black and African Festival of Arts and Culture, he implemented an odd-even rationing traffic system to ease congestion in the state. Car owners whose license plates begin with even numbers were not allowed on most streets on Mondays, Wednesdays and Fridays, and those with odd numbers on Tuesdays, Thursdays and Saturdays.

Admiral Adekunle Shamusideen Lawal voluntarily retired from the Nigerian Navy as an admiral in 1979, and after an illness he died in November 1980. He is survived by his wife Mrs. Taiwo Olufunmilayo Lawal (née Adesanya), whom he married in Lagos in 1965, and his six children.