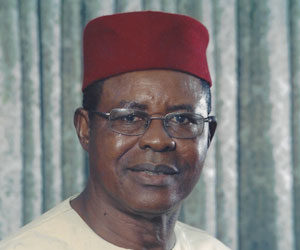 Okoh Ebitu Ukiwe (born 26 October 1940) is a retired Commodore in the Nigerian Navy who served as the de facto Vice President of Nigeria during the Ibrahim Babangida military government from 1985 to 1986.
Military career

Ukiwe was born on 26 October 1940, son of Chief Ebitu Ukiwe of Abiriba in Abia State. His father was a traditional ruler in Abiriba and Head of the Old Bende Division Local Government Appeal Court. Ukiwe joined the Nigerian Navy in 1960 as a cadet (officer), and was commissioned in 1964 with the rank of sub-lieutenant. During the Nigerian civil war from 1966 to 1970 he fought on the Biafran side. After the war, in January 1972 he was readmitted to the Navy, one of the few Igbo officers to regain their position.

Ukiwe was a member of the Supreme Military Council between 1975 and 1977. General Olusegun Obasanjo appointed him military governor of Niger state in 1977. He was re-deployed to Lagos state as governor in July 1978, holding this post until October 1979. He also in the SMC under General Muhammadu Buhari from 1983 to 1985, while serving as Flag Officer, Western Naval command. He was appointed director, Naval Faculty, Jaji (1981–1984) and Flag Officer, Western Naval Command (1984–1985). He became the Chief of General Staff in 1985 under General Ibrahim Babangida. He retired with the rank of Commodore in January 1987 after falling out with Babangida.

After retirement he joined the pro-democracy group, supporting Moshood Kashimawo Olawale Abiola, the president-elect in the June 1993 elections, who was imprisoned after General Sani Abacha took power in a coup in November 1993. He became chairman of companies such as Bitu Properties, Kobimat, Bitu Promar and Rudocons. He was adviser and consultant to Statoil (Nigeria), an offshore oil production company, for nine years.

In 2001, Newswatch magazine speculated that he could run for president in 2003, characterizing him as principled but rigid and highly temperamental, perhaps not flexible enough for the job. In 2006/2007 Ukiwe unsuccessfully ran to become People’s Democratic Party candidate for the presidency of Nigeria.